The Founder of the Monastery: St. Fridolin

In the 10th century monk Balther from Saeckingen wrote the legendary story of St. Fridolin's life. All we know about St. Fridolin, comes from this book.

Balther wrote that Fridolin was from a noble Irish family. He became a priest and left his home to become a missionary. In Poitiers in France he rebuilt the church and the grave of St. Hilarius, both of which had been destroyed, and the bishop made him an abbot.

Fridolin went to "Alemannia", the southern part of Germany (including Switzerland and parts of France). There he founded several churches and monasteries for the honor of St. Hilarius. After a long yourney through the country, he finally arrived on the island in the Rhine at Saeckingen, which was used as pasture by the pagan inhabitants. 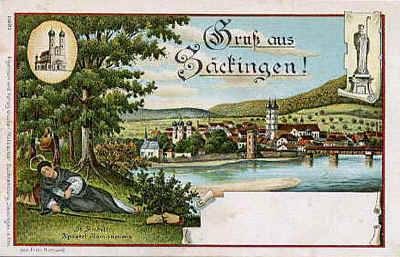 But the Alemanics didn't like that this new religion and expelled the intruder. Fridolin went to the King and was given the island as a royal gift. Then he started building the monastery and the church, still against the resistance of the inhabitants.

Fridolin finished the St. Hilarius church and the double monastery for men and women. On the 6th of March he died and was buried in the church. As time went by a real St. Fridolin kult started. Even today, people come from far away to participate in the annual procession on the first Sunday after the 6th of March. 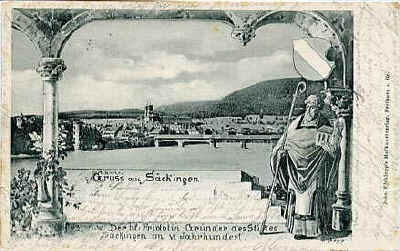 The saint's legend shows him stubbing the island. The dead man often pictured beside the saint is Urso from Glarus, a noble man, who had donated rich properties to the monastery. After Urso's death, his family fought against These donations. So St. Fridolin got the dead man out of his grave to testify in front of the jury. 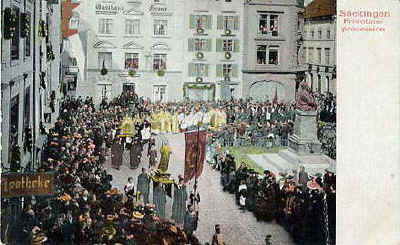 In the past there were many doubts about the truth of Balther's legend. Today we are sure that St. Fridolin was one of the first Christian missionaries travelling through "Alemannia" and that he worked and died in Saeckingen.

But there are many doubts about his Irish origins. It is certain that he lived in the 6th century. We don't know whether the Saeckingen monastery was the first in Alemannia, but it is certain that this monastery marked the beginning of a place of religious, cultural and economic importance. 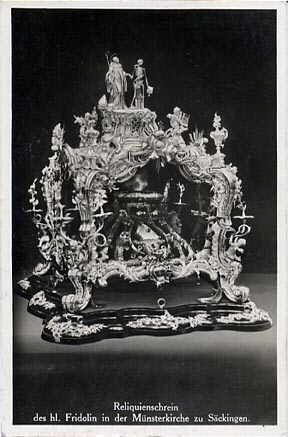 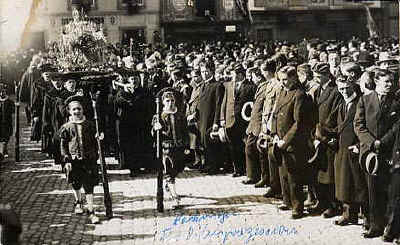