In 1272 a fire destroyed nearly every building in Saeckingen, including the church and the monastery with all the archives. That is the reason that there are no older documents in existance.
The legend tells us, that St. Fridolin built the first wooden church in Saeckingen. In the 9th century a new church was constructed. The restaurated crypt of that former building still exists. There are also the remains of Romanic alterations. 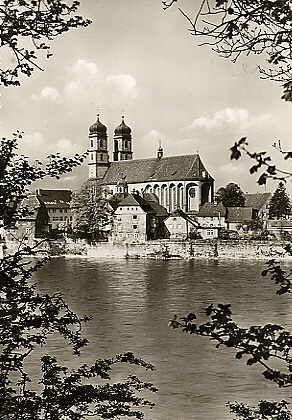 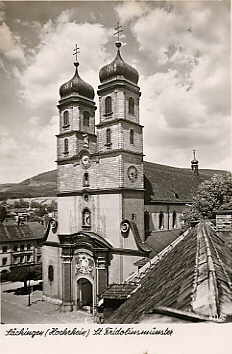 In 1343 the construction of the Gothic cathedral started. In 1581/82 a restauration began, but again in 1678 a fire destroyed the roof, the towers and the Gothic decoration. From 1698 to 1740 the cathedral was changed into the Baroque style. In a new "Baroquisation" from 1752 to 1755, the church became as it is today. 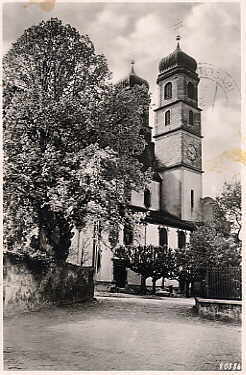 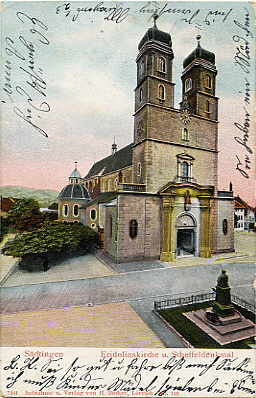 The exterior of the cathedral is composed of nearly every style of western art. There are pre-romanic and romanic fragments beside the dominating gothic style. The portal, the towers, the chapels and the windows are baroque, as is most of the interior. 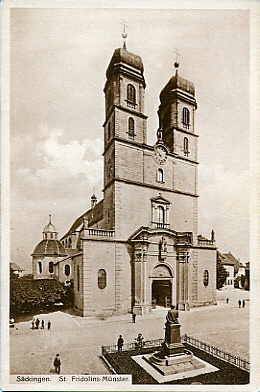 Cathedral with Scheffel Monument
about 1910

In 1806 the monastery was disbanded and the cathedral became the Saeckingen parish church.
From 1968 to 1975 the St. Fridolins Cathedral was completely renovated. Another restauration was carried out between 1986 and 1994. The towers were given concrete pillars in order to stabilize them.