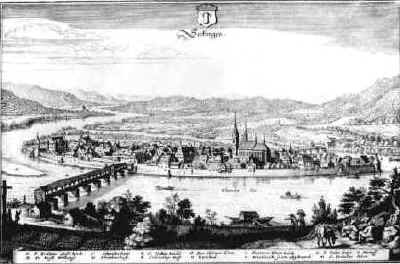 In the collection of old picture postcards are not only cards illustration the Trumpeter and his story. From the beginning of the time when people started to send postcards in the end of the 19th century, there were many cards with a view of Saeckingen, most of them taken from the Swiss banks of the Rhine, and also sights of interesting streets, squares and objects. 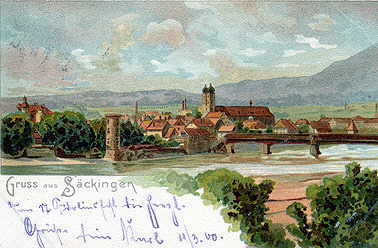 Here you can read about the history of the postcard

The History of the Postcard

With the introduction of the picture postcard in the last third of the 19th century a completely new way of communication began.

The senders had only a little bit of space for their personal notes around the picture, because the front side was reserved only for the adress. The idea of a postcard started in the 1870s, but at first it was not popular, because everybody could read the text.

During the war between Germany and France in 1870/71 the new medium was used millions of times as a field postcard.

From 1885 onwards private companies were allowed to produce postcards, and soon the "golden age of the picture postcard" began.

In 1899 88 millions of postcards were printed. People also began to collect them. Soon there were 60 companies producing albums in Germany. In 1900 one factory in Frankfurt had 1.200 employees; every day they printed hundreds of new motifs. In 1903/04 1.16 billion postcards were on their way throughout Germany.

Until 1905 the front was reserved for the address, so one could only write some sentences on the back around the picture. In 1905 the divided back was introduced.

The front side of the postcard until 1905

First the postcards were printed in a very expensive and complicated way: lithography. For every color they needed a stone or a slab, so they had to print every card up to 16 times to get the different colors.

Today there are reprints of those old cards, but there is a big difference in the printing quality.

After 1892 the postcards were produced by a "bromide of silver printing" using a photo negative. And in the 1920s, the offset printing replaced the former methods.