The Wooden Bridge at Bad Säckingen

The Wooden Bridge at Bad Saeckingen is 200 meters long. It is the longest covered wooden bridge in Europe. The first bridge between the town on the island and the southern bank was first mentioned in a document in the 13th century. 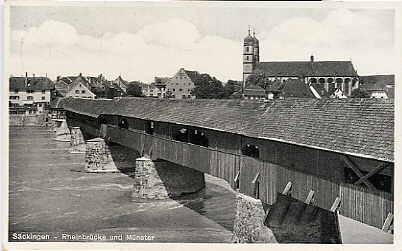 During the Middle Ages, the bridge was often damaged by floods. In 1570 the town started to build a new bridge on a stone construction. That was when the bridge took on its current form.

From then on, floods could not destroy the bridge anymore, but during all the wars of the following centuries the wooden parts were burnt down several times. 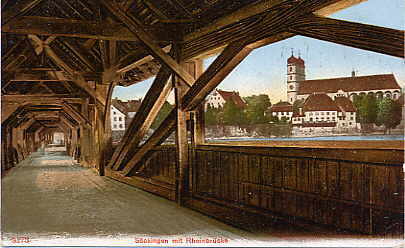 In 1801 the Rhine became the new border with Switzerland. In the 1960s the new power station was built upstream, and the stone construction had to be rebuilt. 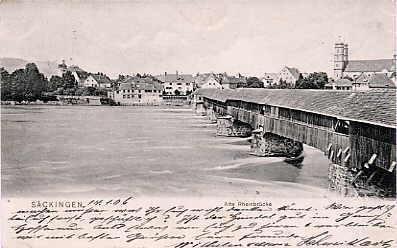 Saeckingen with the bridge seen from Stein, Switzerland
Postmark: 14/01/1906.

Until 1979 the wooden bridge was used for all car traffic to Switzerland. Then the new bridge downstream was built, and the Wooden Bridge is now reserved for pedestrians.

Please click on these pictures to see them bigger.

Saeckingen with the bridge
from Stein, about 1927