Earlier in Saeckingen's history there was a noble house at the place of the castle, much bigger than the other  houses in the town. In the middle of the 14th century the noble familiy von Schoenau came to this area and soon became very important. The family bought that house. In the 15th or 16th century they extended the old house into a castle with four towers on the corners, as you can see it on the "Merianstich". 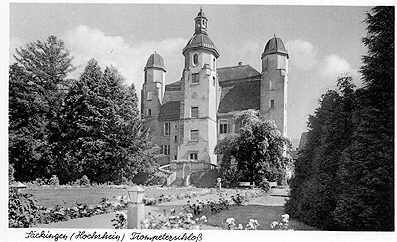 The Schoenau Castle, about 1920

In 1628 the family was divided into different lines, and the castle came into the posession of the family Schoenau-Oeschgen. The founder of this line,  Otto Rudolf, was the father of Maria Ursula von Schönau, the wife of Franz Werner Kirchhofer. 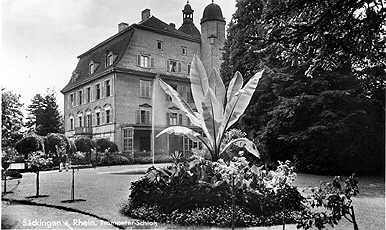 The Schoenau Castle, about 1920

In 1700 the castle was altered to its present form. The old castle was given a new big roof. Two of the towers were pulled down, the two others were made higher, and the new middle tower was built. The interior was renovated in the baroque style.

The Schoenau Castle with the Park, about 1920

The surroundings of the castle were changed into a park. 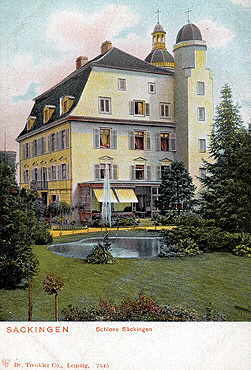 The Schoenau Castle, about 1900

In 1756 the Schoenau-Oeschgen family died out. The castle was sold. In 1830 Michael Graß bought it and set up a brewery in it. In 1856 Theodor Bally bought the castle and restored it. In 1928 the castle came into the possesion of the town.. 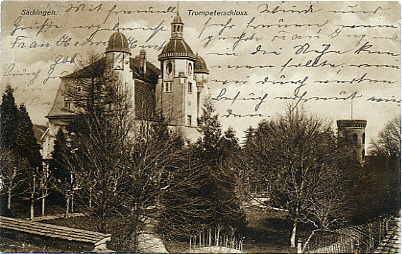 Since 1938 there has been a local museum in the castle. You can see the "Hotzenstube", a room with typical furniture from the southern Black Forest, the Clock Museum, Scheffel's Room, the Museum of Early History, the regional Coin Collection and, since 1985, also a Trumpet Museum. 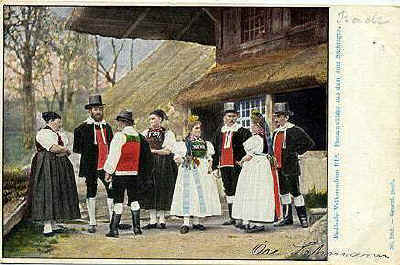 Next: The Castle today