The streets and squares in the center of Saeckingen were very popular motifs for the historic postcards, especially the Muensterplatz, the Rheinbrueckstrasse and the Steinbrueckstrasse. 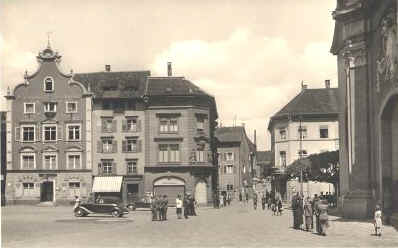 The area around the cathedral was part of the monastery. 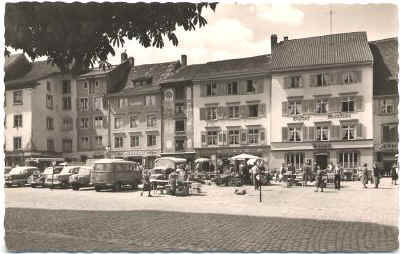 In the early times no houses could be built on this square because of the existence of a big royal building (Palatine). The market was in the Rheinbrueckstrasse, formerly called Marktgasse. 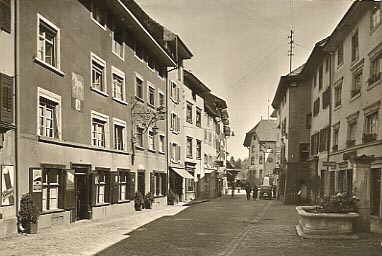 The Rheinbrueckstrasse with Scheffel's House and the entrance to the Wooden Bridge, about 1940. The street got its name in the 19th century. Before that, the northern part was called Marktgasse, and the southern part Rheingasse.

The next streets are much younger. Where the Schuetzenstrasse and the Steinbrueckstrasse now are, was formerly the right branch of the Rhine. Over the centuries the northern branch dried out. In 1830 it was filled in. Saeckingen lost its unique island, but gained an important area for new suburbs. 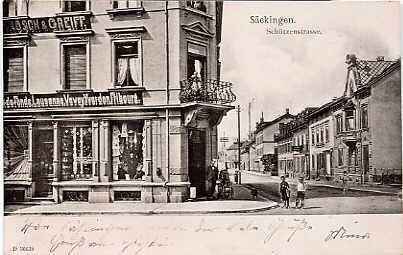 It was constructed in 1886 along the former fortification. It took its name from the Hotel Schuetzen. 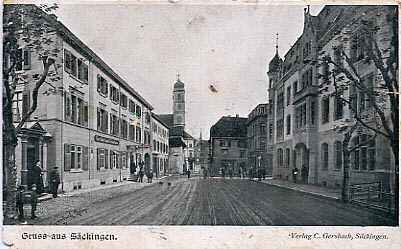 Just here, under the street, is still the old stone bridge. It connected the town with the northern bank and was one of the oldest stone bridges across the Rhine.

Saeckingen was a town on an island with two bridges connecting it to the banks. The Rheinbrueckstrasse was the most important street and connected the bridges, avoiding the monastery district.

Most of the houses were constructed after the fire in 1678, when French troops besieged and destroyed the town.

Until 1979 all the traffic to and from Switzerland went through this street and across the Wooden Bridge. Then the center of town was changed into a pedestrian zone.