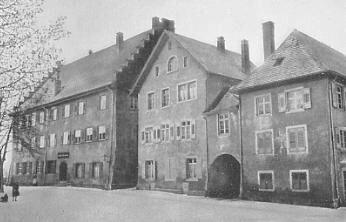 Joseph Victor von Scheffel was born on the 16th of February 1826 in Karlsruhe. After graduating in law he came to Saeckingen in January 1850 to work as a probationer at the district court in Saeckingen. His office was in the former convent building beside the town hall.

The young man lived with mayor Anton Leo in the "Hallwyler Hof" (the Scheffel House, Rheinbrueckstrasse 48). He often spent his spare time in the hotel "Zum Goldenen Knopf", at that time located on the Cathedral Square.

Scheffel travelled and walked through the "Hotzenwald", the southern part of the Black Forest, which he in fact named. And he specially loved the "Bergsee", the little lake in the forest near Säckingen. He was also the one to give the lake its name. 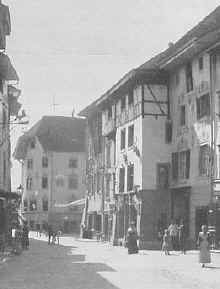 View to the Rheinbrueckstrasse
with the central house at its
end, the Scheffel House on the
banks of the Rhine.

During his time in Saeckingen the young man started writing poetry; and he also discovered a talent and love for painting and drawing. Soon Scheffel made another discovery in Saeckingen: the story of Franz Werner Kirchhofer, whom he transformed into the "Trompeter von Saeckingen". This discovery changes his whole life.

In 1851 Scheffel left Säckingen; 1852/53 he travelled through Italy and came to the Isle of Capri in the Gulf of Naples. There he decided to become a poet, and he wrote the "Trompeter von Säckingen". The book was first published in 1854, and Scheffel's impressive career began. 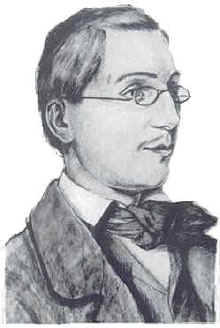 The poet's life was consisted of travelling and changing residences. In 1860 he fell seriously ill. Later he lived in Karlsruhe. In 1864 Scheffel  married Caroline von Malzen. In 1867 his son Victor was born.

In 1875 Scheffel became a Honorary Freeman of Saeckingen, and in 1876 on his 50th birthday, he was knighted by the grand duke of Baden. In 1886 Joseph Victor von Scheffel died in Karlsruhe.

In 1884 the Opera "Der Trompeter von Saeckingen" was first performed in Leipzig. It was composed by Victor Ernst Nessler.
In 1918 director Franz Porten from Berlin produced the Trumpeter Film with his team and nearly 200 local extras in Säckingen.