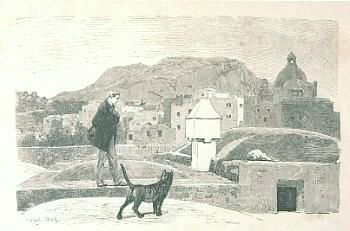 At work: Scheffel above the roofs of Capri.
Illustration by Anton von Werner in the
Edition Deluxe

On the Isle of Capri Scheffel wrote his first work: the "Trompeter von Säckingen". The first editions sold very slowly, but after 1870 the sales increased rapidly. In 1921 the 322th edition was published. The generations of those days devoured Scheffel's poem.

In 1852 Scheffel went to Italy, to Rome - to become a painter. And he really was talented in drawing and painting. In the Trumpeter's Castle some of his pictures are exhibited. But soon he moved on to Capri, and in only a few weeks he wrote his epic poem. The "Trompeter" became his masterpiece, his having not written anything important before. The story of two lovers who could be together only after a set of very unusual incidents. Werner and the titled Margareta met in Säckingen, but the  social difference made a marriage impossible. After five years of separation the compassionate pope changed Werner Kirchhof into 'Marchese Camposanto' and made him an acceptable fiancée. 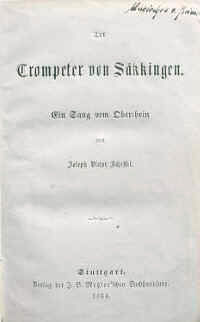 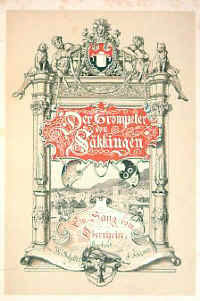 The édition deluxe with many
illustrations by Anton von
Werner

Although Scheffel's book is full of poetry and romanticism, it is also very easy to read. Soon the critics started to lament this, because they thought the "Trompeter" to be too popular. But the readers loved the book.

In the "Trompeter von Säckingen" there's no continuous action; everything is episode, anecdote. The main story twists through impressive pictures full of atmospheric density and tounge in cheek humor. 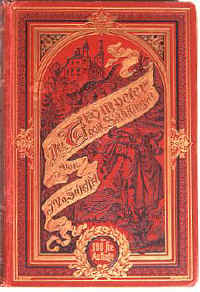