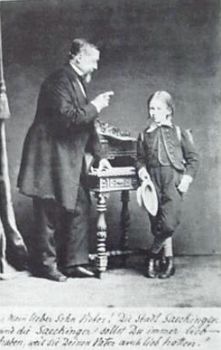 The poet with his son. He says:
"My dear son Victor! You should
always love the town of
Saeckingen and its people as
they loved your father!"

Scheffel is still very popular in Bad Saeckingen, as well as in the other towns where he lived and worked: Karlsruhe, Heidelberg, Radolfzell.

1875 Scheffel became a honorary freeman of Säckingen, and in 1896 the plans for a Scheffel monument started. In 1901 it was built on the square in front of the Cathedral.

There was a bronze Scheffel bust on top of a high granite base, and a  more than life-size Trumpeter made of bronze, set in the middle of a fountain. The monument was made by sculptor F. W. Menges from Munich. The cost of 25.000 Reichsmark was paid by the town of Saeckingen and many individual donors.  Even Emperor Wilhelm II. and Friedrich I. von Baden also donated money for it.

In 1941, during the war the monument was melted down to make granades. Only the Scheffel bust could be saved.

On the poet's 100th in 1926 birthday there was a great Scheffel festival in Saeckingen; another one was held in 1976.

Until 1933 the Monument was surrounded by a metal fence.

circa 1945 without the
monument