Who was the Trumpeter? 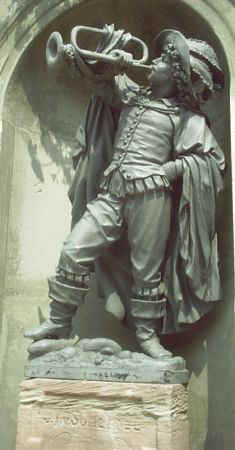 This is how they imagined the Bad
Saeckingen Trumpeter a century
ago. The statue stands on the
western side of the castle. It was
orginally a pattern for the bigger
statue - the Scheffel Monument at
the Cathedral Square.

It was a true story from the 17th century, which inspired Scheffel to write the book about the Trumpeter. Franz Werner Kirchhofer (1633 - 1690) was a resident of Saeckingen, born during the Thirty Years' War. When he was a child, he came to know the noble family von Schönau. The daughter Maria Ursula von Schönau grew up in the Castle. After a long struggle againts the resistance of Maria's brothers Maria and Franz married about 1657.

The couple lived together in Saeckingen; they had five children. Franz Werner Kirchhofer was an important merchant, councilor and teacher. And he was the leader of the Boy's Choir in the Cathedral. Still today the couple's grave stone in a niche outside the Cathedral tells us about their unusual love. (A.Enderle) 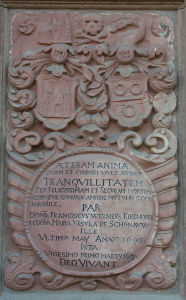 The couple's grave stone in
a niche outside the
Cathedral.